As the Mexican season is winding down, the demand for organic heirloom tomatoes is returning.
Alejandro Madrigal of Covilli Brand Organics Inc., based in Nogales, Arizona, says its organic heirloom tomatoes have approximately three weeks left of production in Mexico’s Valle de Guadalupe region. “Right now, there’s a transition period. Local supplies haven’t started yet on the West Coast, and we’re winding down in Mexico,” says Madrigal.
Once the Mexican season wraps up, there will be a supply gap until the end of July or early August. That program will run until the beginning of September out of the West Coast. “This new program we started last year, we modified it a little bit this year. We started at the beginning of summer and realized that’s not a good time; it’s better if we do it later summer into the fall,” says Madrigal. “So that’s what we’re aiming for this year.” 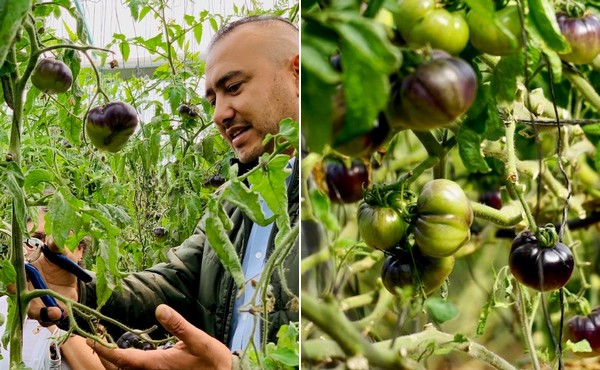 Jose Miguel Ayala, Covilli’s operations manager, tends to the heirloom tomatoes.
A delicate business
Growing and handling heirloom tomatoes, particularly organic heirlooms, is a tricky business. “They’re more challenging to handle than conventional tomatoes. An heirloom wasn’t bred for lots of transportation and handling,” says Madrigal. “So we’ve learned over the years how to pack them without too much handling to avoid bruising them or making them soft.” He also adds that varieties need to be mixed to grow well. “It’s infinitely complex, and then you add the organic component to it, and it’s harder still.”
Packing them has also changed, given more people are asking now for packaged solutions for heirloom tomatoes instead of bulk. “There’s been an increased request for clamshell or bags, something we’re reluctant to do with heirlooms because they don’t display well in clams,” he says. That said, Covilli has developed a recyclable/ compostable cardboard clamshell that is being welcomed by consumers.
Also, seeing continued strong demand out of its heirloom tomato line is its dark purple heirloom tomatoes: Darklooms®. “They have a big following,” says Iris Madrigal. “It has a very unique flavor that you won’t find on the regular tomatoes, so people who’ve tried them will seek them out again.” 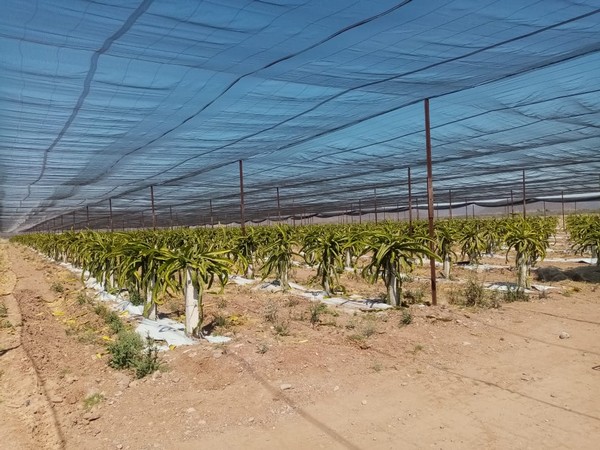 At the end of this month, Covilli will also begin shipping from its 60 hectares of organic dragon fruit.
Shifting to basics?
That said, over the winter, market demand for heirlooms had lagged. “It seems to me because it’s a specialty tomato and coming out of the pandemic, there have been labor shortages all around, including working with retailers, and we think a lot of retailers dialed it back a bit and carried just what they needed in terms of essentials: romas, beefsteaks, TOVs and that’s it,” says Madrigal, noting this was a shift away from the double-digit pre-pandemic growth it had consistently been seeing. “However, now in the spring, we saw demand come back with a vengeance.” He adds that he’s also seeing more interest in processing heirloom tomatoes as well.
As for pricing, it’s similar to last year’s pricing. “It’s unfortunate given the increased costs of everything,” says Madrigal. “We’re going into our fifth increase on cartons, for example, and it’s astronomical. But the heirloom prices haven’t spiked. The market hasn’t pushed them up anymore.”
The shift to shipping heirlooms later this summer isn’t the only change in programming Covilli is seeing this year. At the end of this month, it will begin shipping from its 60 hectares of dragon fruit, with red-fleshed fruit accounting for approximately 85 percent of its production while the remaining 15 percent is white-fleshed fruit. Madrigal says it’s the first year Covilli is shipping this fruit commercially from the only farm in Mexico growing this product organically, and the program will run until December.
More imminently, this week, it’s also beginning to ship its organic Brussels sprouts program, newly expanding into the summer. The program goes until the beginning of August and then gaps until November-December.

<< Back | HortiDaily.com
© HortiDaily.com 2022
Sign up for our daily Newsletter and stay up to date with all the latest news!
You are receiving this pop-up because this is the first time you are visiting our site. If you keep getting this message, please enable cookies in your browser.