Last season, considerably fewer apples and pears were picked in European orchards. That was due to the spring frost. If all goes well, this year’s harvest will be abundant. Supermarkets will be able to put plenty of locally produced organic apples and pears on their shelves again. “Certainly, when it comes to organic produce, supermarkets increasingly want only local produce,” says Robert Elshof of Elshof Organic Fruit. 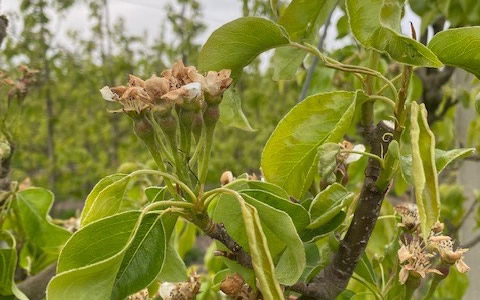 Last year, the harvest was small, so this year, the trees are heavy with blossoms.
Last season, this Dutch company’s organic apple and pear harvests were, on average, 30% lower than in previous years. Elshof Organic Fruit stores, processes, and sells top fruit for a growing number of organic growers. “It was clear from the start that there would be far fewer pears. That turned out to be the case for apples too. Our turnover usually grows annually but was much lower this year.”
“The small pear stock ran out quickly because overseas demand came much earlier. We were empty two months earlier than usual. We could supply pears until late March, but nothing for the free market. Those pears were all in programs. Some colleagues were already empty at the turn of the year,” Robert says, looking back.
No Abate Fetel
In Italy and France, two important pear-growing countries, the frost also caused major upheavals. “There were fewer pears overall due to spring cold in the spring; it wasn’t so much about the variety. In Italy, for example, the Abate Fetel completely failed. We still did well in the Netherlands. But we, too, had storage quality problems due to a wet spring and summer. So, many pears still ended up in processing.” 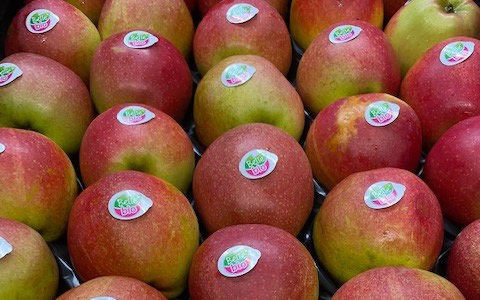 Despite the small harvest, organic growers generally did not suffer losses this season.
Long summer vacation
There are still relatively more apples than pears. “Pears are more of an export product, while we sell our apples mainly in the Netherlands and Belgium. Nevertheless, here too, the stock is smaller than in previous years. We can hold on for a few more months, and then we’ll run out. We’re going to have a long summer vacation,” Robert says,  laughing.
Wet summer equals mold
There was spring frost this year too. According to Robert, only the early-flowering pear varieties suffered a little. “This year, the trees are flowering heavily because there was a small harvest last year, so they can also take a bit. Since conditions are currently optimal, we’re expecting a nice harvest. The trees can, naturally, still molt, but if the weather doesn’t turn completely, I don’t foresee many problems. There’s more chance of the trees having too much fruit.”
“Then we’ll have to thin them out, and, in organic cultivation, that’s done by hand. An unexpected hailstorm poses the highest risk. Or another wet summer. Then mold can cause problems again. Last year, we had pears batches where scab affected 40-50% of them. Many growers insisted on selling their pears early. They didn’t want to risk losing many of them due to fungal issues. There’s still a risk of scab even in storage,” Elshof explains.
He says that despite the low volumes, organic farmers have generally not suffered any losses this year. “Volumes are lower, but prices are good. It’s harder for us as a processing company because less product means machines are down and our staff has no work.” 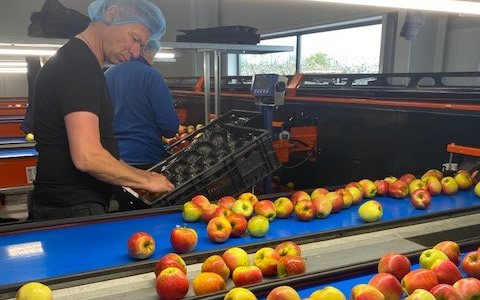 Organic farming is, of course, more intensive, and you need more personnel.
Dutch organic sector growing slowly
Robert doubts the Dutch organic top fruit acreage has increased. “The organic area is expanding very slowly here. In Germany and France, it’s going much faster, and I don’t really know why.” It takes two years of farming entirely organically to make the switch. That, without being able to market the product as such yet. However, the fruit can be sold as a “product in conversion,” which already fetch nicer prices than conventional, especially in a low yield year. From the third year, the crop is fully organic.
“Organic cultivation is, of course, extremely intensive, and you need more staff. That discourages people. You also have to accept that something may not work out, especially cultivation-wise. That’s precisely where the risks lie. But, you can afford the occasional mistake, because the market’s usually good. The product, with its added value, usually achieves good prices. With conventional, it’s the opposite: the risk is in what the market does, instead of in cultivation,” continues Robert.
Mutual consultation
Elshof Organic Fruit operates as a club where growers can share knowledge and discuss things among themselves. “After all, converting is also a thought process. You have to gather knowledge, and we like helping with that. We don’t want new growers to fall into the same traps we did. We want to raise each individual to a high level; that way, we, as an organization, can invariably offer the customer quality products too.”
“This philosophy attracts a better clientele. Organic is a story in which the chain is closed on an environmental level and increasingly on the sales side. With mutual consultation between all the chain’s links about quality, traceability, and continuous supply, everyone knows where they stand. Buyers are then prepared to pay better prices, and the growers are sure of their sales. Cooperation is the key,” says Robert.
In Dutch supermarkets, organic apples and pears are supplied almost exclusively locally. Local production is becoming more important. Consumers have a hard time buying organic pears flown in from, say, Argentina. They also increasingly want to know where the products they put in their basket originate. “In Scandinavia and Germany, that plays an even greater role than in the Netherlands. Their local fruit is even often more expensive than imported products.”
The chicken or the egg?
In supermarkets, the pear/apple ratio is about two to ten. “Countries with very professionalized apple markets, like Germany, often have pears alongside their apples. Even though pears are only a small product in stores, considerable volumes are involved at large supermarkets. It’s often a bit of a chicken and egg story for organic growers.”
“They need supply to stimulate demand, but they also need demand to expand their supply. You obviously can’t grow crops willy-nilly. That’s why retailers and producers need to cooperate. What volumes and what varieties will be needed in the coming years? Once growers have a good idea, they can meet that demand. But that process is slow in the Netherlands.”

Santana and Topaz, two organic apple varieties, are increasingly losing ground to organic versions of familiar varieties.
The market determines the variety
In organic farming, the focus used to lie on disease resistance, with the technical aspect of cultivation being decisive. But Robert knows shoppers prefer an organic version of a familiar apple or pear, such as Elstar and Conference. “You can introduce new conventionally grown top fruit varieties. That, however, comes at a high cost: lots of time, energy, and marketing investment. Organic is a niche market with a roughly five percent share. There’s no money to introduce something new successfully,” he explains.
“Santana and Topaz, two organic apples, are increasingly losing ground to organic versions of familiar apple varieties. The cultivation method doesn’t matter; market demand does. Incidentally, these two varieties are no longer 100% disease-resistant. So it’s often better to grow what consumers want. The same applies to conventional varieties: people prefer the more difficult to grow Elstar to the easier to grow Jonagold. And those who switch to organic might also much rather continue with the Conference pears they have in their orchard than uproot all the trees and plant new ones.”
Picking robot not quite working out
When it comes to new technology, Robert is not yet keen on picking robots. “We follow the development closely, but I think it’s going incredibly slowly. These talks started 20 years ago already. It’s more something for greenhouse horticulture, where they can use the robots for months on end. Our harvest only lasts six weeks. Perhaps a leasing formula could be the answer because labor is becoming difficult, cost and availability-wise.”
Good partnerships ensure good prices
The organic sector faces challenges, but despite these, Robert feels comfortable in that world. “In recent years, our growers, clients, and we’ve grown in a controlled, steady manner. As a large organization, we have an established client base, and in the industry, we don’t constantly run afoul of each other. There’s also a degree of job security because, in our sector, buyers want a reliable service above all else. And that comes at a good price.”
“Thanks to great partnerships, none of the chain’s links’ incomes depend on large volumes that have to make up for small per product unit profit margins. Everyone, naturally, considers cost savings and their returns, but it comes down to understanding each other and letting everyone earn something too. That’s the best way to establish long-term trading relationships and ensure the future for all parties,” he says.
Farming and trading are long-term endeavors that require a clear vision for the future. However, each season’s cultivation and market conditions also largely determine year-end financial results. “Last season, crop yields were low, and prices were good. Then again, the coming harvest should be plentiful.”
“It will cost a little more effort to sell all the apples and pears, will bring more competition, and also affect prices. But I’m optimistic. I think most of our customers will be pleased with the increased volumes because then we can supply them for longer,” Robert concludes.
For more information:

<< Back | FreshPlaza.com
© FreshPlaza.com 2022
Sign up for our daily Newsletter and stay up to date with all the latest news!
You are receiving this pop-up because this is the first time you are visiting our site. If you keep getting this message, please enable cookies in your browser.