More than 100 organic dairy farms abruptly lost their contracts last year. Six months later, they’re cautiously moving forward.
Selina Rooney found out via certified letter. It was delivered last August to her family farm, Rooney Farms, in Morrisville, Vermont. Her mother and sister didn’t expect the news inside to be all that bad. They thought maybe they were about to get a pay cut in their contract with Horizon Organic, which is owned by the French-based company Danone. Instead, the Rooney family’s contract was going to be fully terminated. “We were kind of shocked,” Rooney recalls.
Rooney Farms was one of 135 organic dairy farms across the northeast last year that received notice about their contracts being terminated. The bulk of them were with Horizon Organic, who originally told farmers their contracts would end in August 2022, although that deadline was later extended until February 2023. Another 46 contracts with Maple Hill Creamery, based in Kinderhook, New York, were severed a few weeks later. Half of those farmers were without a buyer at the end of last year, and the rest will face the same fate come May.
Rooney scrambled. She called every organic cheese and butter producer she could find in the region. She called plant-based food companies to see if they could instead start growing crops for them. She called conventional milk producers to see if they could move their organic herd over—a move that would have cost them money, as organic production costs are higher than conventional pay rates. Unlike the Maple Hill farmers, the Rooneys were in a relatively good place, with more than a year to figure out their next steps. But that’s not much time for a farmer.
“When you’re farming, you’re planning 10 years in the future, 20 years in the future,” Rooney says. With every chore, every task the family did at the farm, a question lingered in their minds. Would they be around next year? “When breeding cows, we’re thinking maybe we should breed more Angus so that, if we need to sell beef, we can do that. But thinking about doing farm improvements…everything was kind of put on hold.”
Photo by Suslov Denis, Shutterstock.
A few weeks after the initial contract terminations infiltrated the news last year, a group called the Northeast Organic Family Farm Partnership (NOFFP) stepped in to boost demand for local organic dairy products. Founded by Gary Hirshberg, co-founder and former CEO of organic yogurt maker and dairy company Stonyfield, the NOFFP has been a vocal advocate, encouraging consumers to pledge their support for organic dairy from the northeast. Hirshberg, who is considering a gubernatorial run in New Hampshire, told Modern Farmer last week that, while the farmers were certainly concerned and perhaps even scared, they were cautiously optimistic.
Copy on the NOFFP website reads that unless these farms “find alternate outlets, they will face dire financial futures, including closures for many”—urging consumers to take “quick action” to save organic dairy farms in the Northeast. “If only 10 percent of consumers in this region purchased just one additional pint per week of regionally produced organic dairy products, this would equal the entire output of these 135 farms. WE CAN SOLVE THIS CRISIS!”
The website includes a map of the 135 “at-risk farms” that lost their contracts or will lose them in the near future, suggesting that a consumer’s pledge would go directly to supporting those farms. Recently, high-profile celebrity chefs such as Tom Colicchio and Dan Barber have promised to source half of their dairy orders through the organization’s 33 participating brands—various farms and retailers that include Stonyfield Organic (which controls 13.3 percent of the organic yogurt market in North America). However, none of the farms listed on the website are those whose contracts were terminated last year.
One of the NOFFP’s fiscal sponsors, the Maine Organic Farmers and Gardeners Association (MOFGA), says the market for local dairy is strong, and groups such as NOFFP will help sustain a long-term demand for the product. “There’s no reason for a gallon of milk on the grocery store shelf in Maine to come from dairies based in other regions of the country. The NOFFP offers a clear way for consumers to understand where their milk comes from,” said MOFGA executive director Sarah Alexander in a statement.
The mission to raise the profile of organic dairy in the region is an admirable one, but NOFFP’s announcements and messaging imply a direct connection to the exact farms affected by the contract terminations, which misleading at best. It’s unclear how much dairy the organization has already helped to sell or will help sell in the future. 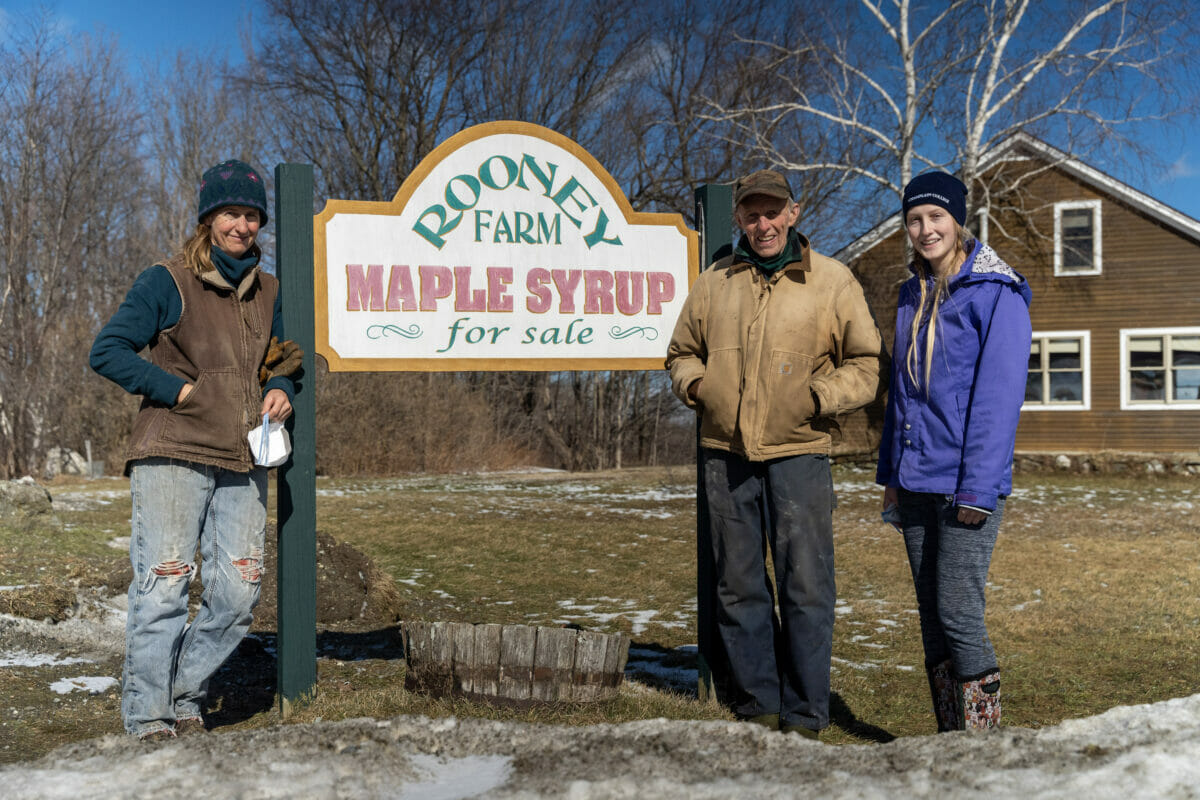 For now, the Rooneys are working out the last of their contract with Horizon, but they will soon move over to Organic Valley and become members of the co-operative. The Wisconsin-based company recently signed 80 letters of intent, picking up the bulk of the 135 farms whose contracts were abruptly severed last year. Organic Valley is also listed as an NOFFP partner, so the farms that have since signed on with it could theoretically benefit if people pledge to purchase their dairy.
“We wanted to get out there and give these people some assurances that we were going to bring them on,” says Travis Forgues, executive vice president of membership for Organic Valley. The letters of intent state that the farms will be picked up by Organic Valley when their current contracts end—or, if the farmers or Horizon choose, to initiate a 30-day notice period. “It gives us some flexibility to make sure we’re taking on the milk at the appropriate time. We could have waited until the summer and done a membership agreement when we were ready to do it. But I don’t think that helps the mental stability, the anguish, of these farmers.”
One of the reasons Danone gave for dropping the contracts last year was in part because of shipping costs. The company told Vermont officials that it no longer wanted to transport milk from around the Northeast to its plant in New York. “But they’re still shipping their products out here to us. Even though they won’t take our milk,” says George Osgood, a dairy farmer in Corinth, Vermont. Osgood previously sold milk to Horizon, but he and his wife have already switched the contract over to Organic Valley. He says communication in the small co-operative is markedly improved, although he’s hoping his pay will rise a bit if demand for organic dairy in the region increases.
Bringing dairy in from other regions will likely be a reality very soon for these markets, as Horizon moves on from the northeast and seeks out larger organic farms in Ohio, Indiana and throughout the midwest, where larger quantities of milk can often be produced at lower prices. Many small farmers have long argued that’s in part due to a loophole in the Origin of Livestock provision, and they have pushed to tighten regulations around organic dairy. This week, the USDA announced its final ruling for the legislation, which will put a stop to cycling dairy animals between organic and conventional feeding.
The Origin of Livestock rule will take a year to come into effect and, until then, northeast dairy farmers are still figuring out their next steps. Many have signed on with other producers, such as Organic Valley. Some are heading to the spot market, a way for companies to buy up extra inventory when needed, providing inconsistent income for producers. Others are retiring or closing up shop. Osgood says groups such as the recently formed Northeast Dairy Taskforce are also trying to help yet are only producing suggestions that “aren’t even realistic.” The farmer says he heard a figure of $125,000 being floated as a retirement incentive, which he calls “ridiculous.” Instead, Osgood will keep going, just like many of the farmers whose lives were upended last year.
It’s clear that short- and long-term solutions are needed to solve the ongoing problems that dairy farms face. Organic Valley can bring these farmers into their fold today, and the NOFFP can try to get celebrity chefs to commit to buying organic dairy products from the northeast. Governmental task forces can pressure the USDA to implement its recommendations. But will any of these moves help the larger industry in the long run? “This isn’t a crisis of the moment,” Forgues says. “We have a crisis of a generation coming.”

This site uses Akismet to reduce spam. Learn how your comment data is processed.
I’ve been buying Maple Hill Creamery, Organic Valley and Stonyfield Farms milk for years and will continue to do so! It’s a shame when big business screws the little guys.
Every effort needs to be made to protect these organic farmers.
Hooray for Organic Valley for picking up some of these contracts!
‘Cycling cows between organic and non-organic feeding’ Jeez, how low can these businesses go! Goodbye Horizon.

The Million Gardens Movement doesn’t just help you grow a garden, we’re also bringing gardens to kids across the country – and you can help. Learn more at milliongardensmovement.org
Necessary cookies are absolutely essential for the website to function properly. This category only includes cookies that ensures basic functionalities and security features of the website. These cookies do not store any personal information.
Any cookies that may not be particularly necessary for the website to function and are used specifically to collect user personal data via analytics, ads, other embedded contents are termed as non-necessary cookies.